what the pros have to say about their own experiences

Our team of experts has taken some time to jot down tips & tricks and musings about their own photography experiences.

Browse the Pro's Corner articles below to see what they have to say. 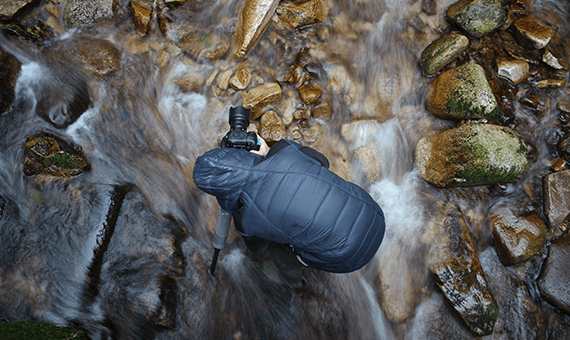 For those carrying the iPhone 6 as your main digital camera, we have some good news. This latest version includes the ability to manually change the exposure of an image.

Capturing the perfect fireworks shot takes a bit of practice and good timing, but with the right setup and tools, your shots can improve quickly.

The One Filter You Should Have For Summer Photography

The ProMaster HGX UV filter is designed specifically for digital lenses, so it minimizes internal reflections created by CCD and CMOS sensors.

Summer is all about capturing those special vacation moments, and beach photos top the list of trends on today’s Instagram feeds.

When it Pays to Polarize

June is the ideal month for outdoor photography as temperatures are warming up and storms are calming down. Now is the time to venture out and capture the majesty of Mother Nature. It’s also the perfect time to use a polarizing filter.

Photographer Amanda Brummer-Onstott takes photos of her husband all year long, but Father's Day gives her an extra-special reason to document him, both with their kids and on his own Amanda explains how she shows Dad at his beste for his special day.

Jesse from Milford Photo breaks out one of the store's new DJI Phantom 3 Advanced drones and takes it for a spin over Milford's picturesque lower duck pond.

Check out these quick tips from renowned nature and landscape photographer David Akoubian on how to capture jaw-dropping scenes.

An Off the Beaten Path Tour of Paris with Liz Huston

After loosing her memory card on the last day of her tip, photographer Liz Huston became inspired and began photographing Paris in a whole new way.

Check out these quick tips from San Diego fine-art photographer Monica Royal on how to bring the tiniest subjects to life using macro lenses.

From Blue Angles air shows to FIA Formula E races, photographer Jan Wagner puts together a pictorial tale that tells the story of each action-packed event he photographs.

Wrestling with Depth of Field

With a little help from his son, Jess the Milford Photo guy explains depth of field.

When and How to Use Lens Hoods

Jesse Thompson , the Milford Photo guy, does a quick review of lens hood use.

The Sigma 50mm F1.4 DG HSM | A lens is simply amazing. This standard field of view, fast-aperture, full-frame, prime lens combines outstanding sharpness and fast autofocus, in a lens that is built with a singular vision focused on performance.

How to Take Super-Cool Concert Photos

George Strohl has seen just about every type of concert there is, from the pyrotechnics of Judas Priest to Taylor Swift's screaming fangirls. "I grew up in the '80s, so I was always a rock/heavy metal kind of guy," says the Central Illinois photographer. "But each event has a different type of energy, and it's exciting to see that in concert, no matter who the artist is."

Kristi Odom was supposed to have been an electrical engineer. But when she inherited camera equipment from her late grandfather, she started photographing concerts in college for the student newspaper, which led to a photography contract with RollingStone.com and, eventually, a move to Australia, where she got her photography degree.

How to Make Everyday Images Extraordinary

When Courtney Slazinik and her husband moved into their home, they got rid of the dark wood furniture that was inside and replaced it with white IKEA furniture. The purpose was twofold: to affordably redo their home so it would withstand the daily routine of three young girls ("our kids are still so little and destroy everything," she laughs), as well as to create the perfect setting for the photos Courtney's always taking of her family. "All that brightness looks so beautiful in pictures," she says.

How to Take Detailed Macro Photos

Aerospace engineer by day, macro photographer by—day. Or at least the earliest part of the day, which is Los Angeles resident Jie Hua Lin's favorite time to capture his highly detailed photos of the grasshoppers, frogs, and other tiny creatures that reside in the Madrona Marsh Preserve in Torrance, California.

Most people head indoors when the mercury drops and the snow starts to fall-but photographers know it's one of the best times to brave the elements to capture unique seasonal photos. David Akoubian shares his tips for stunning cold-weather captures.

How to Take Expressive Bird and Wildlife Photos

Kristofer Rowe's specialty is photographing the birds and wildlife near his home in Connecticut. He shares how he seeks out and captures animal emotion in his photographs.

A histogram graph tells a story about the exposure of the image and can guide you in making adjustments so that images are properly exposed. For winter shooting, a histogram can be very useful in showing if bright white snow is spiking your exposure and causing your image to appear ‘blown out’ or overexposed.

The Low Down on Long Exposure Photography

Long exposure photography often instills trepidation in photographers, although there is nothing to fear as long as you’re open to experimentation and are willing to learn how to adapt to different situations.

The Sigma 50mm F1.4 DG HSM | A sets the new benchmark for fast standard prime lenses for full-frame DSLRs, and is offered at a very fair price for its total performance. And the Sigma 50mm F1.4 EX DG HSM, originally introduces in 2008, is still in production; and it remains an exceptional fast fifty...

Now that the holiday season has ended, what are you going to do with those 527 photos you took? And didn’t your daughter have some great shots on her iPhone? One of the many joys of digital photography is the ability to snap away with reckless abandon. Sorting and organizing afterward? Not so much...

How to Capture Captivating Travel Photos

Mike Gulbraa has been taking pictures since he was 10 years old, a hobby that became his full-time career in 2009 when he launched M&M Photo Tours. Now he takes groups and private tours (photo societies, corporations, and families) to capture iconic images all over the world.

How to Shoot Family Portraits

Stephanie Elie's tips for gathering the gang together for a holiday photo.

With the holiday season upon us check out these "Tried-and-True tips for capturing the glow of winter festivities", shared by Kristi Bonney.

How to Take Fine-Art Macro Photographs

Looking for a different perspective in her photography has always been paramount to San Diego photographer Monica Royal. "When I speak about photography, I tell people to study the subject matter they really like, then try and do something unusual with it that hasn't been done," she says.

Forget sending the same holiday greeting that you do every year. Kristi Bonney reveals her inspirations for creating memorable images.

Light and the Portrait

Part time shooters are doing more and more of the image making. But are they as good? Some may be... but a starting point for any potential semi-pro should be a exercise in self reflection.

Mike Wilson, son of owner Jim Wilson, is the creative source behind most of the videos that you see on our website. He was involved with story creation, behind the camera filming, audio dubbing, music, narration and video editing...

Photographs, whether of the stereo in the living room or flooded street, provide us with proof. Proof that we are here now and once were there.

In Praise of the Fuzzy Snapshot

One of my favorite summer shots was made on vacation a few years ago. Life sometimes moves too fast for careful technique. Shot from the hip, some images capture a moment more likely missed by meticulous attention to mechanical details like shutter and aperture.

Taking the Boy and Camera Out to the Ballgame

Any photographer should have a plan if he's looking for a particular shot. A thoughtful visual concept is useful, at least as practiced by the Milton Bearle comedy school, which states: if you can't think up a good joke borrow someone else's.

Shooting Fireworks on the 4th of July

Great fireworks images just don't happen: it takes some planning and a bit of luck. Finding a good location is key and keep some kind of foreground in your image.

Time to take another walk along Silver Sands. I had the pleasure of doing just that with some members of Milford Photo's meetup group: an informal gaggle of photographers looking to record a great sunset.

Summertime provides plenty of opportunity to take great shots. Here are some tips to keep in mind whether you shoot a fancy DSLR or handy point-and-shoot.

This time of year is kind of an off time for scenic photos outdoors. The leaves are pretty much gone, the pumpkins have been picked and the days are getting shorter.

Exploiting the Power of Diagonal Lines

In terms of composition, diagonal lines emphasize power, strength and the feeling of impending movement--while horizontal lines, for example, bring to mind concepts of stability or balance.

Give Your Sunsets a Great Foreground

It's easy to look at a pretty sunset and think that nature will do the work for you. But you can improve any sunset photograph by finding a good foreground.

If you're looking for something really fun to shoot and happen to be in the New England area, head over to the Rhode Island National Guard Open House & Air Show--one of the best air shows in the country.

Go Catch Yourself a Full Moon!

The great thing about shooting a full moon is that you get a few days where it's pretty full each month--and you get a new chance each month!

If you live in the Milford area and you're looking for a great picture-taking idea, check out Lighthouse Point Park in New Haven.

Use Textures for a Sense of Touch

Because photographs only exist in two dimensions (height and width) and have no depth (the third dimension), it's important to emphasize textures to give photos a "touch" factor.

scout photo badges
video training
meetup
personalized instruction
If you don't see what you're looking for, please contact us!
contact us

Get directions to our store