At Milford Photo, we don't want to sell you a camera and never hear from you again. We love photography and take pride in our events where we and our customers can create new images, test our limits, try something new...

Join us at one of our photo-centric events, meet other local photo enthusiasts, and bring home fresh portfolio-worthy shots. Looking forward to seeing you there!

New Renovation! We renovated our passport studio and added a second strobe with softbox, and DSLR camera with portrait lens. The result is a more professional, flattering light for your passport, VISA or permit photo. As always, we tackle Canadian, United Kingdom and other passport sizes... [ more ]

Expanded Hours & More Camera Coaches - To make our popular 1-2-1 Personalized Instruction more convenient and valuable to you, we've expanded our hours and our pool of expert Camera Coaches. [ more ]

Milford Photo is now offering a new way to browse Canon products online. Canon develops world class photography tools to take you from the first inkling of creative vision to the printed final product. Whether you are a camera point and shooter or an advanced professional photographer, Canon helps you create the highest quality photos. Browse Milford Photo's comprehensive selection of Canon digital cameras, accessories and more. [ more ]

Milford Photo's John O'Neil exhibited 17 of his photographs of details of classic cars through January 31st at Café Atlantique, across the street from Milford Photo in downtown Milford. The Exhibit was called "Detailing" with an opening on January 13 from 6 to 8pm.

The images show details of classic cars — hood ornaments, logos, emblems, grills. Details that appear to be small works of art designed with great care in an age when automobiles often seemed larger than life. The images were captured with a Canon 7D and Canon 24-105mm f4L lens over several years at the Southbury Training School Car Show.

The photographs were printed and framed by Milford Photo. 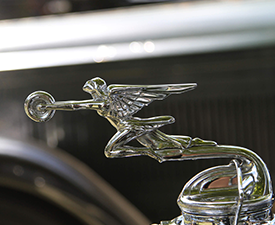 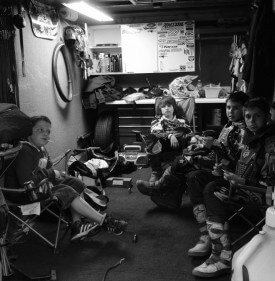 Focus ’14: Viewing the World Through the Lens

March 23, 2014 - A black-and-white photo called Irrigation, which Wilton photographer Daryl Hawk called “technically perfect in every way,” was selected Best of Show at Focus ’14, the annual photography exhibition presented by the Wilton Arts Council. The winners were celebrated at a reception Friday evening, March 14, at Wilton Library where the 214 photos will hang through March 29. Many of the photos are for sale.

March 8, 2014 - Alex Burdo, 17, isn’t your typical teenager, nor is he a typical Make-A-Wish Foundation beneficiary.

Not only did he defy statistics and steer away from asking for a trip to Disney — one of the most common requests, foundation representatives said — he took the opportunity at a recent event first to talk not about himself or the disease he’s been battling for five years, but rather to talk about the need to help all child cancer patients.

“There are so many kids with childhood cancer,” Alex said Friday evening, when he joined friends and family at Milford Photo to receive his Make-A-Wish wish — a high-tech Canon camera.

“And yet childhood cancer receives less than 1% of the national cancer funding,” Alex said. “It is imperative that more attention be given to this issue.”

Alex, a Fairfield resident, is a birder and a photographer first; a very intelligent young man who attends Hopkins School in New Haven second, and third, a young man with cancer. When he was 12 years old he was diagnosed with osteosarcoma, a form of bone cancer. He’s had numerous therapies and 15 surgeries, and he’s been robbed of bone in his body, much in the shoulder area.

“There are so many things about birding,” Alex said. “From the aesthetics of the birds — they’re beautiful — to going out to the field, to the unknown. You never know what you will see.”

Alex radiates intelligence and goodwill when he enters a room. But because the young man is modest and humble, as friends said, the best way to learn about him is through the words of those who know him.

Jay Gepfert is a wish granter who met Alex three months ago when he went to the family’s home to talk about Alex’s wish.

Months ago when Alex was talking to Gepfert and co-wish granter Laura Loretan about the camera equipment he’d like to have, he looked at them several times and asked if he was requesting too much.

Nelson North, director of the Connecticut Audubon Society in Fairfield, has known Alex for seven years, since the young man started visiting the Audubon.

A few years ago, the Audubon nominated Alex for an L.L. Bean Outdoor Hero award, which Alex won. Alex has his own birding blog, floridascrubjay.wordpress.com, where he posts news about his sightings. He’s also involved in his community, raising awareness about birds.

Last year, the Audubon and a group of volunteers installed birdhouses, bird feeders and other bird-attracting devices in Alex’s back yard so he could look out his window at the winged world as he battled his disease.

“This guy is the real deal,” North said. “He can hold himself up against any ornithologist [studier of birds] in the field. There’s a rumor he actually memorized the book.”

Joan Winter handles communications at the Fairfield Audubon, and she has a special bond with Alex. She went through chemotherapy shortly before he did, and she knew what he was up against.

“He’s my hero,” she said. “He’s incredible. He’s a fabulous, incredible birder. He has great resilience, and he’s an incredible human being.”

Alex is good friends with Winter’s daughter, Abbie, who went to school with Alex at the Unquowa School in Fairfield and took part in efforts to cheer him while he was very sick. The class made a baseball mobile out of Red Sox cards, because he loves the Red Sox, Abbie said.

Alex’s grandfather, Jim Orrico of Fairfield, has traveled with Alex to spot birds, from two-degree locations in Ontario, to 10,000 feet up in the mountains of Arizona, to the Rio Grande, where they looked across to Mexico. The two are planning a trip to the Bahamas and Florida, where they hope to find and photograph the Florida Scrub-Jay.

“He started me in birding,” Orrico said, “then we bought him a little camera, and now he’s a very good bird photographer.”

In addition to his blog, Alex has had his photographs published in birding magazines, his grandfather said.

Debbie Artinian, a Make-A-Wish wish granter, said when the agency learned that Alex’s wish was to be outfitted with a top-notch camera for bird photography, they went to Jim Wilson at Milford Photo to find out just what was best for a young man with limited strength, as a camera with a powerful lens is fairly heavy.

In addition to the Canon 5D Mark III professional camera and special high-power lens, Wilson suggested a lightweight tripod that will help Alex get the shots he’s looking for.

Altogether, the camera package is worth close to $10,000, and was made possible by Make-A-Wish, combined with donations from Canon and Milford Photo.

“These are the kinds of things that touch all of us,” Wilson said. “We’ll get more out of it than anything.”

Wilson contacted Canon for the equipment, and Wilson made his own contributions, telling Alex to pick out any camera bag in the shop he wanted. He may also take photo classes at the store whenever he wants.

“Somebody asked for photographic equipment to record memories,” Essex said. “What better thing can you do.”

Noble Proctor, a professor from Southern Connecticut State University and an author, joined the event Friday and handed Alex several birding books and a collection of bird photographs.

No one had to tell Alex who the professor was: “His reputation precedes him,” Alex said.

The Audubon gave Alex a life membership and a print of his favorite bird, the Florida Scrub-Jay. Alex looked at the print and smiled, then commented, “This is going to show what a nerd I am. I’m amazed at how much the scientific name has changed over the years.”

Alex is the son of Gaby and Gerry Burdo, and has two sisters, Olivia, 10, and Isabelle, 15.

Alex plans to enter the biology and environmental fields someday. Along with advocating for research into childhood cancer, Alex said he also wants to focus his efforts on climate control and the environment.

“I’m looking to help the planet that has sustained me and my family,” he said.

As the Make-A-Wish gathering came to a close Friday evening in Milford, Alex looked at the agency wish-granters who had become a little part of his life in the past few months.

Jim Wilson of Milford Photo hands a tripod to Alex Burdo of Fairfield, who received camera equipment from the Make-A-Wish Foundation Friday. Alex has the camera he received strapped around his neck.

photo restoration
video transfers
prints & gifts
custom framing
If you don't see what you're looking for, please contact us!
contact us